When Malcom Went to Oxford 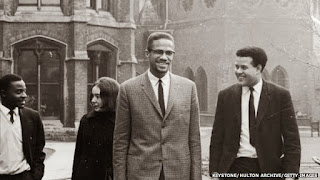 Why "by any means necessary"? When Malcolm went to Oxford to debate the notion that extremism in the defense of liberty is no vice, he lit the place on fire. And he did so at the invitation of The Oxford Union's first black president, Jamaican Rhodes Scholar Anthony Abrahams. I had the pleasure of working for Tony decades later when he hosted a public affairs program in Jamaica after having served in the government and heard about this event from him. He was understandably proud! It's absolutely unequivocally worth listening to the entirety of Malcolm X's oration.


I'm sharing the full audio now to mark the 90th anniversary of Malcolm X's birth. The performance is absolutely brilliant and the event was historic and is still highly relevant today, so I hope you'll listen for those reasons, but I also love that it has a tiny bit of a Jamaican connection (of course Jamaicans have to be inna everything).

There's also a video recording of the last 12 minutes. The visuals of both Malcolm and his audience are priceless: http://youtu.be/auWA7hMh5hc

Henry Louis Gates wrote a great piece about that night for the Root, describing it as follows:
"In an ironic twist, Malcolm X was invited to Oxford to defend the position that former U.S. presidential nominee Barry Goldwater had staked out in his acceptance speech at the 1964 Republican National Convention—to many, the dawn of the conservative movement in America: “I would remind you that extremism in the defense of liberty is no vice. And let me remind you also that moderation in the pursuit of justice is no virtue.” ....

He had been invited by none other than the Oxford Union’s second West Indian student president, Eric Anthony Abrahams, a 24-year-old Rhodes scholar who went on to become the BBC's first black television reporter before assuming various leadership roles in the Jamaican government."


And you can read about what led to that invitation in this more personal piece about Tony Abrahams here: