Am I Blue? (washingtonpost.com)

Michael Kinsley, speaking for us all, well for me at least, nails one of the key frustrations of the current political conversation:

"So, yes, okay, fine. I'm a terrible person -- barely a person at all, really, and certainly not a real American -- because I voted for the losing candidate on Tuesday. If you insist -- and you do -- I will rethink my fundamental beliefs from scratch because they are shared by only 47 percent of the electorate.

And please let me, or any other liberal, know if there is anything else we can do to abase ourselves. Abandon our core values? Pander to yours? Not a problem. Happy to do it. Anything, anything at all, to stop this shower of helpful advice.

There's just one little request I have. If it's not too much trouble, of course. Call me profoundly misguided if you want. Call me immoral if you must. But could you please stop calling me arrogant and elitist?"

MSNBC Altercation - Noam is an Island

A call to action from Eric Alterman's blog:
"Democracy is not easy and it is not for the timid. Despite this setback I promise you I will continue to fight for people who know we can do better in our part of Indiana and in our country ... I am going to stay involved in our public debate and I encourage you to do the same. We must continue fighting for what we believe in. 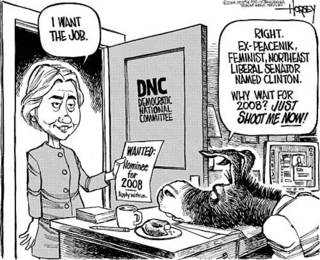 On 'Moral Values,' It's Blue in a Landslide

In the NY Times, Frank Rich on the limits of the values showdown:

"The 22 percent of voters who told pollsters that 'moral values' were their top election issue - 79 percent of whom voted for Bush-Cheney - corresponds almost exactly to the number of voters (23 percent) who describe themselves as born-again or evangelical Christians. They are entitled to their culture, too, and their own entertainment industry. And their own show-biz scandals. The Los Angeles Times reported this summer that Paul Crouch, the evangelist who founded the largest Christian network, Trinity Broadcasting Network, vehemently denied a former employee's accusation that the two had had a homosexual encounter - though not before paying the employee a $425,000 settlement. Not so incidentally, Trinity joined Gary Bauer and Fox News as prime movers in 'Redeem the Vote,' the Christian-rock alternative to MTV's 'Rock the Vote.'


But the distance between this hard-core red culture and the majority blue culture is perhaps best captured by Tom Coburn, the newly elected Republican senator from Oklahoma, lately famous for discovering 'rampant' lesbianism in that state's schools. As a congressman in 1997, Mr. Coburn attacked NBC for encouraging 'irresponsible sexual behavior' and taking 'network TV to an all-time low with full frontal nudity, violence and profanity being shown in our homes.' The broadcast that prompted his outrage on behalf of 'parents and decent-minded individuals everywhere' was the network's prime-time showing of Steven Spielberg's 'Schindler's List.'

It's in the G.O.P.'s interest to pander to this far-right constituency - votes are votes - but you can be certain that a party joined at the hip to much of corporate America, Mr. Murdoch included, will take no action to curtail the blue culture these voters deplore. As Marshall Wittman, an independent-minded former associate of both Ralph Reed and John McCain, wrote before the election, 'The only things the religious conservatives get are largely symbolic votes on proposals guaranteed to fail, such as the gay marriage constitutional amendment.' That amendment has never had a prayer of rounding up the two-thirds majority needed for passage and still doesn't."
Posted by caribbelle at 11/11/2004 06:31:00 PM No comments:

The Legal Path to Abu Ghraib

While we're considering whether Alberto Gonzales is a wise and moderate choice for AG, let's recall that the White House Counsel's most notable act thus far was his recommendation to the President to declare Al Qaeda and Taliban fighters outside the scope of the Geneva Convention's rules for Prisoners of War. The road to Abu Ghraib was paved with determinations like this one from Mr. Gonzales.

From Newsweek:
"May 17 - The White House's top lawyer warned more than two years ago that U.S. officials could be prosecuted for 'war crimes' as a result of new and unorthodox measures used by the Bush administration in the war on terrorism, according to an internal White House memo and interviews with participants in the debate over the issue.

The concern about possible future prosecution for war crimes and that it might even apply to Bush adminstration officials themselves is contained in a crucial portion of an internal January 25, 2002, memo by White House counsel Alberto Gonzales obtained by NEWSWEEK. It urges President George Bush declare the war in Afghanistan, including the detention of Taliban and Al Qaeda fighters, exempt from the provisions of the Geneva Convention."
Posted by caribbelle at 11/10/2004 10:07:00 PM No comments:

Luminaries on the left and right emboldened post-election:

Despairing democrats can take solace in some surprising post-election fallout. For one, there's growing conflict within the Republican party over those cherished cultural issues. Second, prominent liberal voices are fired up and providing intellectual fuel for the fight ahead.

Maureen Dowd, Lawrence O'Donnell, Jon Stewart, Eric Alterman and his friends - to name just a few of the already outspoken voices from the campaign- have all become more vigorous in their critiques since the election. They're pretty mad. And they're really not going to take it any more. The question is though, will the cacaphony of voices cancel each other out in the already weary marketplace of ideas? If so, could the left be more effective by conceding the stage to the extreme right for a while? More on Dowd et al.

No doubt about it. The growth in the youth vote was substantial. More than 29% over 2000. Kerry owes the closeness of this election to that demographic. Yahoo News! :

"Under-30 voters came through in big numbers this year, with more than 20 million casting a ballot for president, researchers found. The turnout bested their 2000 showing by more than nine percentage points and heartened activists who worked to get young voters to the polls. "

And the Republican infighting begins!

This should give Democrats some comfort. Despite control of the house and the senate and success with ballot initiatives, don't think it's going to be smooth conservative sailing any time soon. (CNN, This Week) There is a major fight brewing within the party that will reveal the extreme elements in all their frightening glory. As we know, the far right want payback for their support in the form of leadership of the supreme court. And, they're willing to take out anyone, Republican or Democrat, who stands in their way.

Dr. James Dobson, one of the most important leaders mobilizing that voting bloc as Founder and chairman of "Focus on the Family," has wasted no time publicly laying down the gauntlet for republican moderates. First Dobson issued a warning to a white house staffer on the day after the election not to take them for granted. Now he's made this warning more specific and more public in his appearance this morning on "This Week with George Stephanopoulos."

Dobson said this about head of the Senate Judiciary Committee, Arlen Specter, who was brave or foolish enough to say he would oppose anti-Roe v. Wade court nominees in a press conference on Wednesday:

"Senator Specter is a big time problem for us. We're very concerned about him. I campaigned against him. .I thought that the comment that was made by the senator. was one of the most foolish and ill-considered comments that a politician has made in a long time. President Bush came to Pennsylvania 30-plus times to campaign for him. And the next day after he wins this mandate, he wins this enormous victory, he goes on the air and sticks his thumb in the president's eye. That makes no sense at all. Senator Specter is a problem not only because of the judiciary but because he has been the champion of embryonic stem cell research and so many other things. He's remembered most for having sabotaged Robert Bork. He is a problem and he must be derailed."

And lest you think Dobson is alone, he adds this point:

"The republican senators know they've got a problem. They're aware that Senator Specter has put himself in opposition to the president. He stands in the roadway, with the great mandate that has been given to this president now and he is in opposition to it. They know that and they also know that millions of people are upset over it. You couldn't get a phone call in to Washington D.C., into the capital on Friday because of these comments and that's not gonna go away."

And on and on. Dobson and his friends are also gunning for the senior Democratic member of the committee Patrick Leahey, whom he dubs a "god's people hater." Warms my heart. I really hope Dobson continues to speak out. It's the best thing that could happen. Hopefully, this could help save us moving forward.

Senator Arlen Specter (R-PA) is quickly backtracking after the swift Christian-right backlash against his pro-choice comments. Buried in this article, however, is an important truth about the great obstruction the Republicans have been flogging across the country:

"During Bush's first term, Democrats blocked 10 of his judicial nominees to U.S.
Appeals Courts, the nation's second-highest courts. At the same time, the Senate
confirmed 203 of Bush's court appointments."


So nothing less than a blank check decorated by a rubber stamp will do? Shouldn't these facts be discussed in the 1st sentence of media reports on this issue rather than buried in the close? People deserve to have the facts. Clearly we Democrats need figure out how to communicate their message through the so called liberal media.